Over the years, parts of Gloucester Township were annexed by the expanding city of Ottawa. Gloucester was incorporated as a city in 1981 and became part of the amalgamated city of Ottawa in 2001.

The Township of Gloucester remained without permanent settlers until 1812. The first settler in Gloucester was Braddish Billings, a lumber jobber on the Rideau River. On his journeys he spotted a location now known as Billings Bridge. In the winter of 1812-1813, he cleared four acres to build a cabin. He eventually acquired 1,400 acres of land. For seven years, Billings and his family were the only settlers in Gloucester. Then neighbours arrived close by and others near Black Rapids.

In 1820, a survey was completed and by the time the Rideau Canal was opened in 1832, a bridge crossed the Rideau at the Billings settlement and workers were taking up land near Long Island. When Gloucester was incorporated as a Township in 1850, its western limit was the Rideau River and its northern limit was the Ottawa River. 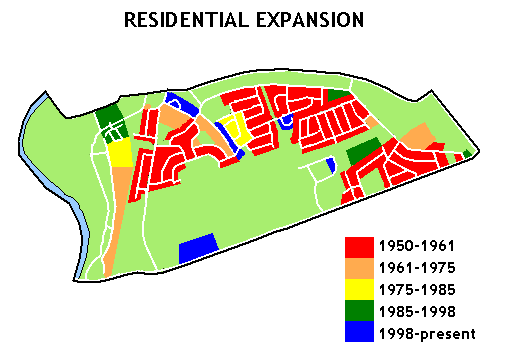 The neighbourhood was primarily built in the 1950s during the baby boom era, but there are some new developments, especially near Station Boulevard and Avalon Place, as well as on Bathurst Avenue, Rolland Street and on Smyth Road, as well as commercial development at the Ottawa Life Sciences Technology Park.

Riverview Park is home to a variety of schools and parks, and the area is relatively diverse socioeconomically. There are many apartment buildings in Riverview, specifically on Riverside Drive, Coronation Avenue, Alta Vista Drive and on Russell Road. There are also many townhouses. Riverview Park is home to CHEO (Children’s Hospital of Eastern Ontario) as well as the Ottawa General Hospital, the Perly-Rideau Veteran’s Hospital, and other medical facilities. Riverview Park is home to a diversity of schools. There is one French elementary school (Lycée Claudel), a French High School (Franco Cité), an English Alternative school (Riverview) an English public school (Vincent Massey) and a Montessori school. There are also five churches a fire hall, a community centre (Dempsey) two shopping areas and six parks.

Riverview Park is also served by three transitway stations: Hurdman, Lycée Claudel and Smyth. Riverview Park in 2000 has an approximate population of 12,000 from 5,538 residences (homes and apartments).

The Community Association The first meeting of the Riverview Park Property Owner’s Association was held on November 17, 1952 in the basement at the home of Mr. H.A. McPhee, Balfour Street. The meeting was called to order by Mr. Jack Johnston who officiated as Chairman for the evening. Most of the general meetings were held monthly due to the activity of the RPCA in monitoring the development within the community.

More details on both the growth of Riverview Park (along with fabulous pictures) and on the activities of the Riverview Park Community Association can be obtained in Orrin Clayton’s book, the “History of Riverview Park” written in 2007. You can purchase a copy from Orrin via letterit@rogers.com